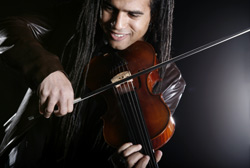 As the inaugural StudioSound artist in 2004, Daniel Bernard Roumain (DBR) created DBR@SMH Volume I: Black Man Singing, a classically inspired original composition based on the exhibition Chris Ofili: Afro-Muses 1995–2005. For the fifth anniversary of StudioSound, we invited DBR back to Harlem to compose a new work that would captures the energy, spirit and vibrancy of the neighborhood. The new composition, DBR@SMH Volume II: Portraiture, is inspired by the works in Wardell Milan: Drawings of Harlem and the conceptual ideas of 30 Seconds off an Inch.

Incorporating the actual voices of many Studio Museum artists, DBR@SMH Volume II: Portraiture is a sonic venture into the Harlem landscape.

“For this second volume, I will continue to sample the sounds from my Harlem neighborhood, but this time I am more concerned and consumed with the work that hangs on the walls of the Museum, and the voices of the artists themselves,” says DBR. “All artists have voices and ideas that we hope to understand and interpret. Through Portraiture I seek to connect the literal timbre and tones of the artists’ speaking voices with their work as it is displayed in the galleries. I hope to achieve a broader, parallel understanding their works and their perspectives.”

A world-renowned composer, performer, violinist and band leader, Haitian-American artist DBR melds his classical music roots with his own cultural references and vibrant musical imagination. A native of Margate, Florida, DBR studied music as an undergraduate at Vanderbilt University’s Blair School of Music, where he currently serves as a visiting professor of composition, and completed his graduate work at the University of Michigan under the tutelage of Pulitzer Prize-winning composer William Bolcom. Well-known for his stylistically diverse compositions, ranging from orchestral scores to musical direction for the Bill T. Jones/Arnie Zane Dance Company, DBR has performed in a variety of venues from Carnegie Hall to the stage of FOX’s American Idol.