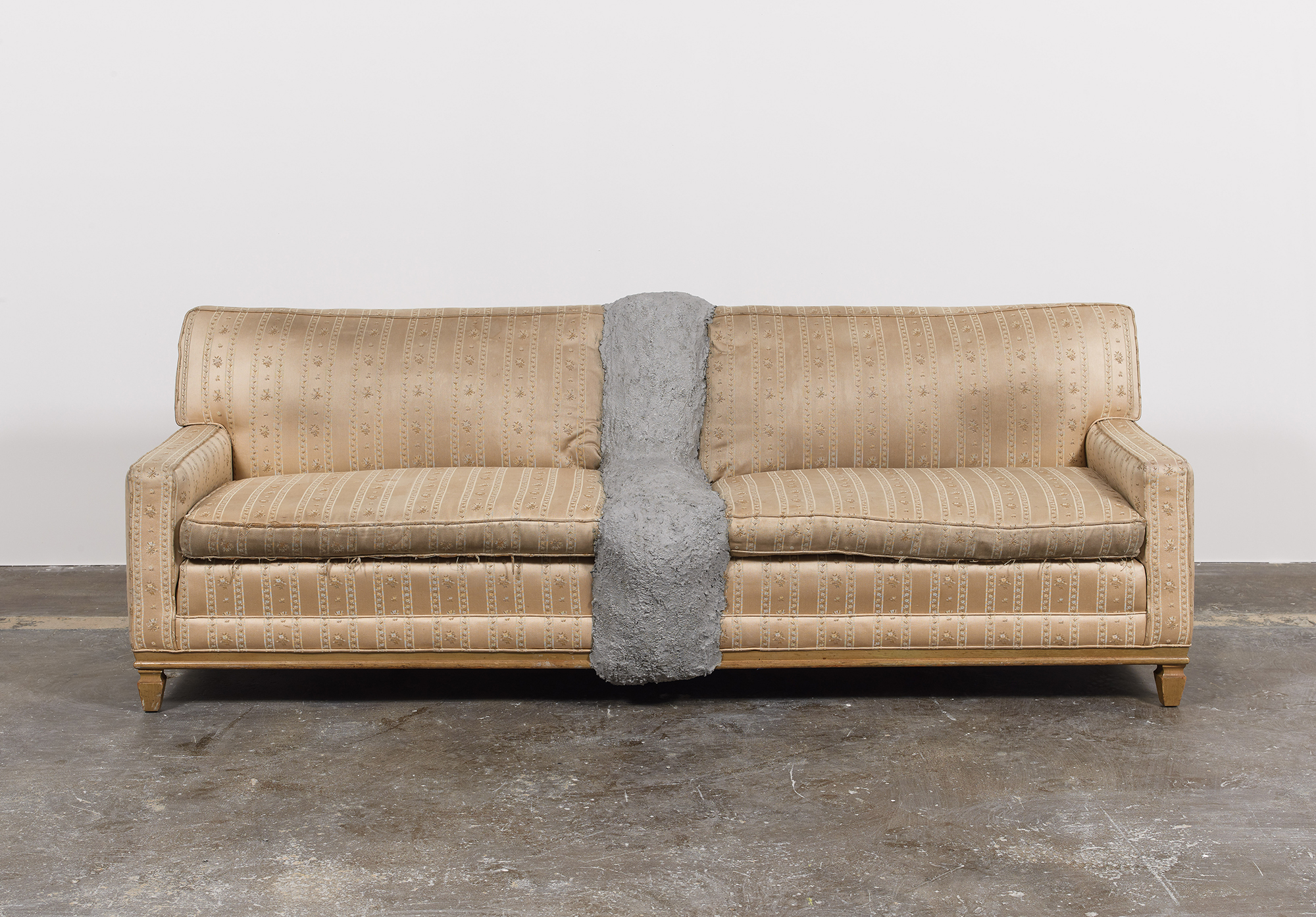 For more than a decade, Rodney McMillian has been exploring the domain of home as part of a larger examination of the intersection of race, class, gender and socioeconomic policy. Rodney McMillian: Views of Main Street is the first exhibition to reveal the full trajectory of this major aspect of the artist’s complex and varied practice in painting, sculpture, video and performance. Organized by guest curator Naima J. Keith, Deputy Director of Exhibitions and Programs at the California African American Museum, Los Angeles, in close collaboration with the artist, the exhibition brings together more than twenty key works made from 2003 to the present that use symbols of domesticity to scrutinize the political and economic biases within the myth of a universal, middle-class “Main Street.”

In works such as Couch (2012)—a sateen sofa sawed in half and then cemented back together—McMillian uses post-consumer objects including discarded mattresses, carpets, chairs and bedsheets as both the material and the subject matter of his art, as he evokes the physical, psychological and economic distress of communities hit by loan defaults, home foreclosures and unemployment. McMillian juxtaposes these sculptures with works such as Untitled (The Supreme Court Painting) (2004-06) that challenge the terms that government and the media use to discuss justice, democracy and the rights of citizens in their private space, especially as these political ideals are experienced by African Americans.

"As the title suggests, I hope this exhibition will bring out the complexities of the conversations that happen on different Main Streets, with their disparities of race, class and economics,” Rodney McMillian said. “Perhaps more important, I hope to question what ‘Main Street’ means. When I’ve heard that expression, I have never believed it referred to me or other African Americans, regardless of our economic station."

Rodney McMillian (b. 1969, Columbia, SC) received his MFA from the California Institute of the Arts in 2002. He is also an alumnus of the Skowhegan School of Painting & Sculpture and the School of the Art Institute of Chicago. His work has been featured in past exhibitions at the Studio Museum, including When the Stars Begin to Fall (2014), The Bearden Project (2012), Philosophy of Time Travel (2007) and Frequency (2005). His works are in the collections of the Los Angeles County Museum of Art; Museum of Contemporary Art, Los Angeles; Orange County Museum of Art; Museum Abteiberg, Mönchengladbach, Germany; Hammer Museum, Los Angeles; and The Studio Museum in Harlem.

Rodney McMillian: The Black Show forms an extended meditation on the United States in patterns cut by class, economic status, culture, race, gender, and history. It brings together a tightly focused selection of new and recent work that offers Blackness as subject, form, process, emotion, and politics. Accompanying Views of Main Street and The Black Show will be will be a full-color scholarly publication titled Rodney McMillian, co-edited by Naima J. Keith and Anthony Elms, Chief Curator at the Institute of Contemporary Art, Philadelphia. In addition to its contributions by Keith and Elms, the book will feature newly commissioned essays and responses by leading figures including Charles Gaines, artist; Rita Gonzalez, Curator of Contemporary Art, Los Angeles County Museum of Art; Dave McKenzie, artist; and Steven Nelson, Professor of African and African American Art History, University of California, Los Angeles. Thelma Golden will offer the introduction and Amy Sadao, Director of the ICA Philadelphia, will provide the foreword.

Rodney McMillian: Landscape Paintings is comprised of a suite of paintings on found bed sheets and a video that provoke questions about history and identity by engaging the tradition of landscape representation.