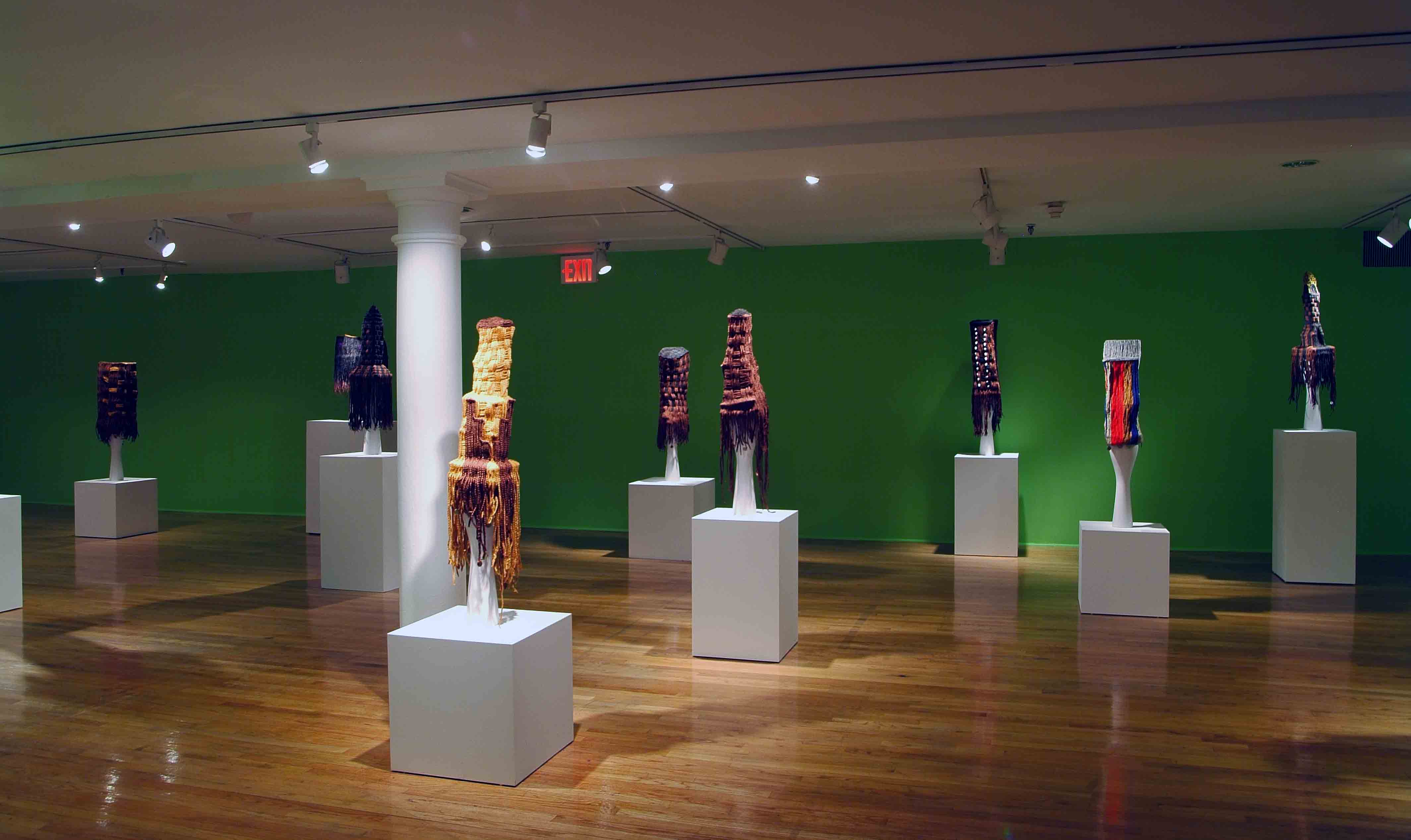 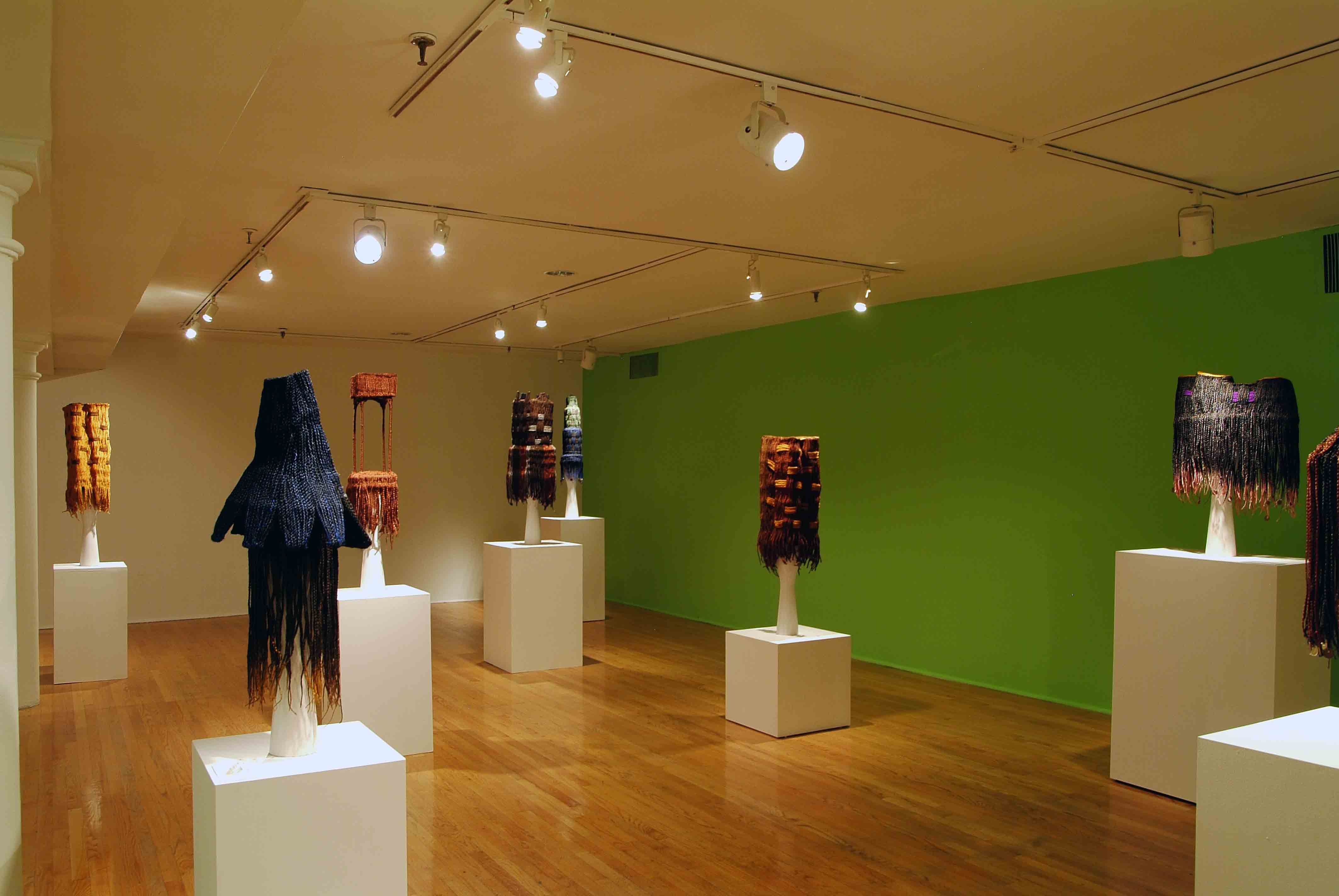 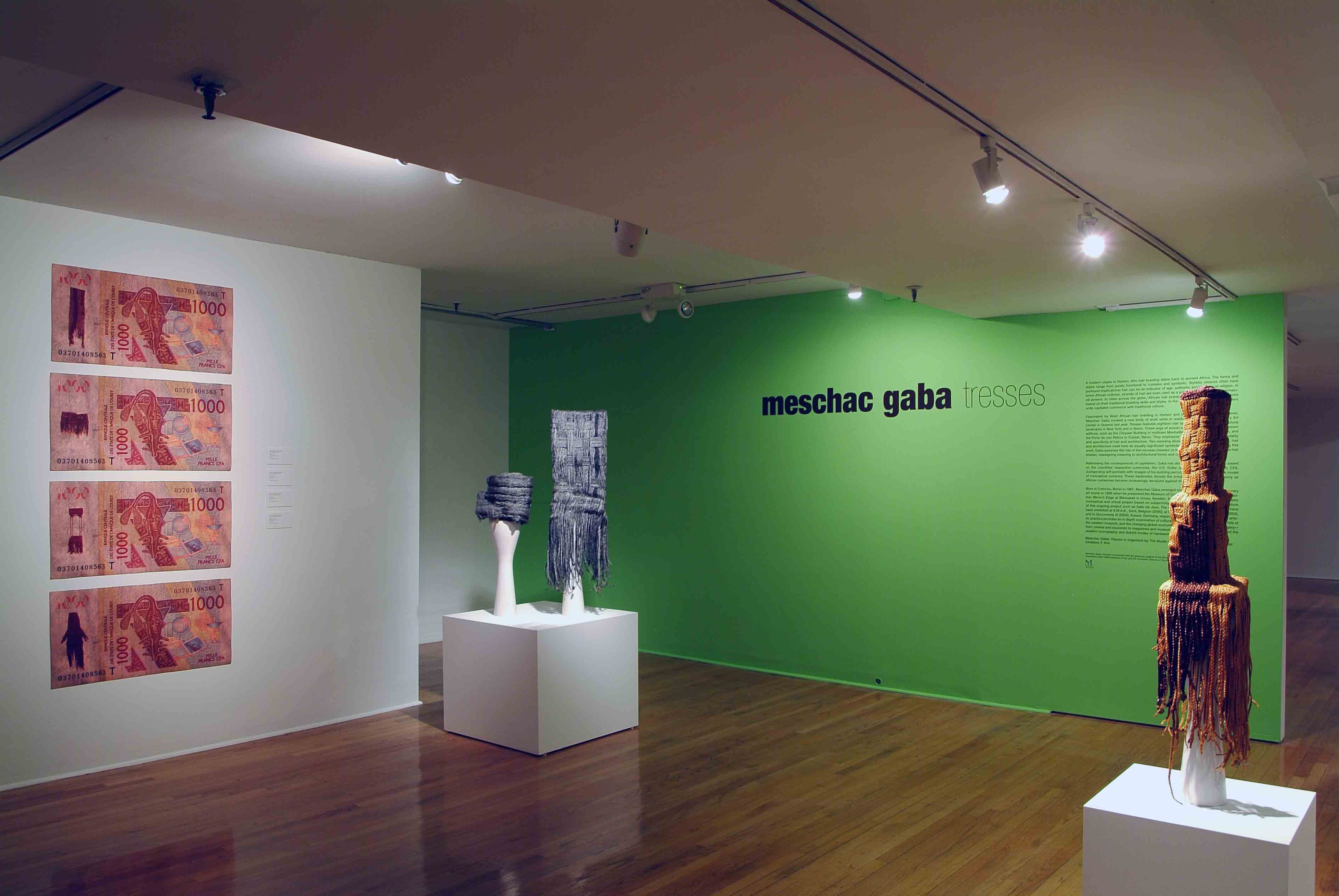 A modern staple in Harlem, Black hair braiding dates back to ancient Africa. The forms and styles range from purely functional to complex and symbolic. Stylistic choices often have profound implications; hair can be an indicator of age, authority, social status or religion. In some African cultures, strands of hair are even used as a potent substance with supernatural powers. In cities across Europe and the Americas, African hair braiders produce extravagant creations based on their traditional braiding skills and styles. In the space of the salon, these braiders unite capitalist commerce with traditional culture.

Fascinated by West African hair braiding in Harlem and inspired by Manhattan skylines, Meschac Gaba created a new body of work while in residence at P.S.1 Contemporary Art Center in Queens last year. Tresses features eighteen hair sculptures based on architectural landmarks in New York and in Benin. These wigs of woven artificial hair interpret well known edifices, such as the Chrysler Building in midtown Manhattan, Hotel Theresa in Harlem, and the Porte de non Retour in Ouidah, Benin. They emphasize the shared fragility, sentimentality and specificity of hair and architecture. Two seeming divergent products of humankind, hair and architecture meet here as equally significant symbols of modern culture. In making this work, Gaba assumes the role of the nouveau tresseur or tresseuse, a traditional Beninese hair braider, reassigning meaning to architectural forms and cultural experiences.

Addressing the consequences of capitalism, Gaba has also created a series of prints based on the countries’ respective currencies, the U.S. Dollar and the West African Franc CFA. Juxtaposing self-portraits with images of his building perruques, Gaba fashions a new model of conceptual currency. These banknotes denote the imbalance of the global economy as African currencies become increasingly devalued against the Euro and the Dollar.

Born in Cotonou, Benin in 1961, Meschac Gaba emerged onto the international contemporary art scene in 1999 when he presented the Museum of Contemporary African Art in the exhibition Mirror’s Edge at Bilmuseet in Umea, Sweden. It marked the beginning of an expansive conceptual and virtual project based on subjectivity of museum spaces. Parts and portions of this ongoing project such as Salle de Jeux, The Salon, and Library of the Museum, have been exhibited at S.M.A.K., Gent, Belgium (2000), at the Palais de Tokyo, Paris, France (2002), and in Documenta XI (2002), Kassel, Germany, respectively. Gaba’s complex and varied artistic practice provides an in depth examination of cultural appropriation, public space, the role of the western museum, and the changing global economy. His appropriation of tourist imagery –from cinema and souvenirs to magazines and museums—allows the viewer to deconstruct the western iconography and disturb modes of representation in contemporary art.

Meschac Gaba: Tresses is presented with the generous support of the Mondriaan Foundation, Amsterdam, The Peter Jay Sharp Foundation 2004-2005 Exhibition Fund, and the Consulate General of The Netherlands in New York.