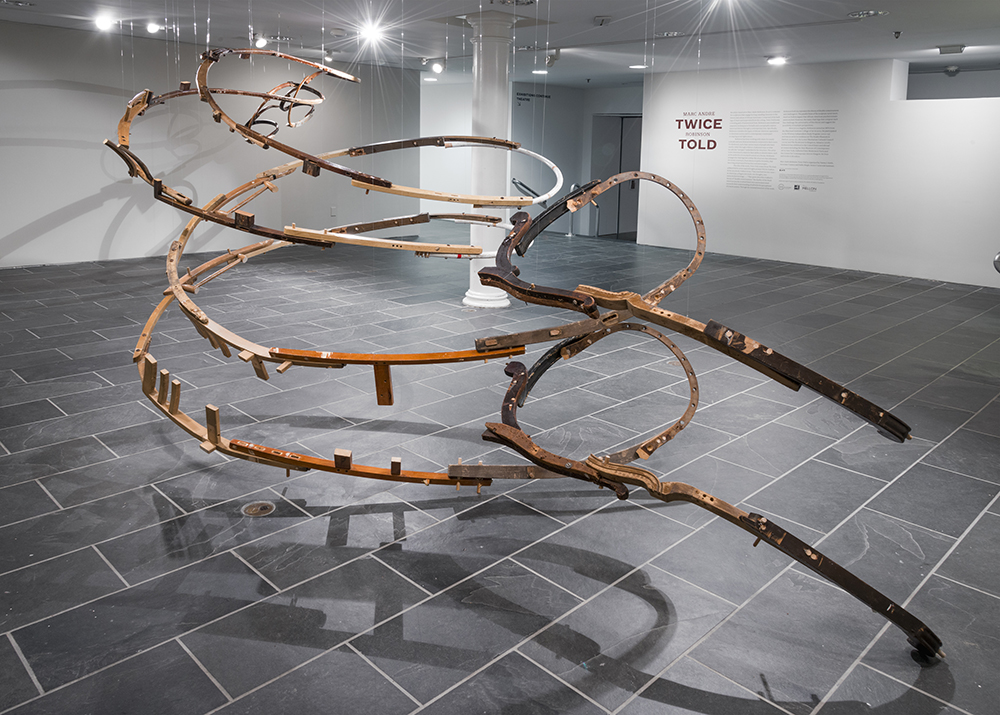 Brooklyn-based artist Marc Andre Robinson (b.1972) is known for sculptures that engage his long-standing interests in the history and culture of African Americans. Composed of the back legs of chairs and suspended from the ceiling, Twice Told forms a winding path of symmetrical lines. Robinson uses traditional carpentry techniques to formally and conceptually explore American history through a contemporary lens. Specifically, Robinson considers the legacy of African-American oppression in American society and its contemporary counterpart in ongoing social rights issues.

Robinson has been working with chairs for nearly a decade and sees them as intimately connected to their users. For Robinson, each chair carries traces of people who have used it, either through evidence of physical wear or what he calls the “energies” embedded in the structure. The artist is also interested in chairs for their ability to denote status, such as the authority of a monarch seated on a throne. Robinson arranges the chair legs into a whip-like structure that references the social constructs, from slavery to police brutality, that have long perpetuated hierarchies and stereotypes.

The title of the work, Twice Told, comes from The Souls of Black Folk by writer and civil rights pioneer W.E.B. DuBois. In his 1903 book, DuBois wrote, “One ever feels his two-ness—an American, a Negro; two souls, two thoughts, two unreconciled strivings . . . .” This quote describes DuBois’s theory of “double consciousness,” the duality of the Black American psyche in which Black men and women must reconcile understanding of self with the perceptions of a racist society. Through the twinned structure of the work, Robinson both incorporates the theory of double consciousness and challenges it. The parallel lines of the sculpture never meet, much as DuBois argues that African-American psyches remain unreconciled. However, the many chair legs that compose each line challenge the universality of this theory and suggest the possibility of multiple perspectives.

Born in Los Angeles, Robinson earned an MFA from the Maryland Institute College of Art in 2002. He participated in the Whitney Independent Study Program (2002–03) and was an artist in residence at The Studio Museum in Harlem (2004–05), the Lower Manhattan Cultural Council (2009) and The Rocktower in Kingston, Jamaica (2008). Robinson has exhibited in the United States and abroad at venues including the New Museum of Contemporary Art in New York, Galleria d’Arte Moderna in Turin, the Centre for Contemporary Arts in Glasgow and Salamatina Gallery in New York. He lives and works in Brooklyn.

Exhibitions at The Studio Museum in Harlem are made possible thanks to support from the following government agencies: The New York City Department of Cultural Affairs; New York State Council on the Arts, a state agency; and the New York City Council.

Additional funding is provided by The Andrew W. Mellon Foundation.