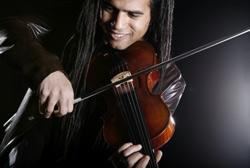 A world-renowned composer, performer, violinist and band leader, Haitian-American artist DBR melds his classical music roots with his own cultural references and vibrant musical imagination. A native of Margate, Florida, DBR studied music as an undergraduate at Vanderbilt University’s Blair School of Music, where he currently serves as a visiting professor of composition, and completed his graduate work at the University of Michigan under the tutelage of Pulitzer Prize-winning composer William Bolcom. Well-known for his stylistically diverse compositions, ranging from orchestral scores to musical direction for the Bill T. Jones/Arnie Zane Dance Company, DBR has performed in a variety of venues from Carnegie Hall to the stage of FOX’s American Idol.