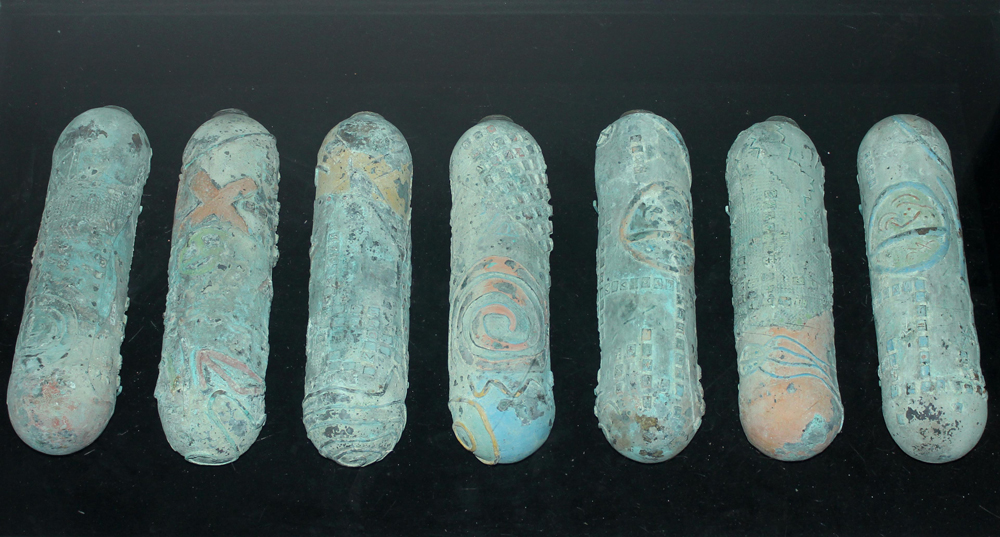 As The Studio Museum in Harlem prepares to close its doors, and begin construction on our new home, we have the exciting task of excavating and relocating Houston Conwill’s The Joyful Mysteries (1984–2034 A.D.), 1984.

The seven time capsules have been buried beneath the Museum’s 125th Street Atrium for over three decades, nearly as long as Studio Museum has called this building our home. As part of our Last Look weekend, on Sunday, January 14, visitors will have the opportunity to participate in a special session of Studio Squared: Time Capsules. Much like Conwill solicited testaments from leaders in Black culture for his capsules, we invite contributors to record, collage, and illustrate their reflections on the Museum as a historic and conceptual space.

Conwill was a lasting friend of the Studio Museum and we are excited to relocate The Joyful Mysteries in our new building before their final excavation in 2034. Below, Studio remembers Houston Conwill, from an “In Memoriam” piece published in our Winter/Spring 2017 issue.

Houston Eugene Conwill (1947–2016), a multidisciplinary artist whose public works span the American landscape, passed away in November 2016 at sixty-nine years old. A sculptor, painter, and performance and conceptual artist, Conwill is best known for his site-specific public artworks that marry his deep-seated spirituality with the achievements of African-American artists, activists, and intellectuals. His multigenerational work is as much a lasting monument to Black culture as it is a series of discerning and delicate designs meant to extend wisdom and compassion to all.

Conwill was born in Louisville, Kentucky. He spent time in a Benedictine monastery and served in the U.S. Air Force during the Vietnam War before receiving a BFA from Howard University in 1973. In 1976 he received an MFA from the University of Southern California. While at Howard he met his wife, Kinshasha Holman Conwill, also an artist. Holman Conwill, now Deputy Director of the Smithsonian’s National Museum of African American History and Culture, served as Director of The Studio Museum in Harlem from 1988 to 1999.

Conwill’s first public commission was in 1974 for the St. Augustine Church in Louisville, in partnership with Holman Conwill. This was followed by additional commissions throughout the 1980s, including at Hartsfield-Jackson Atlanta International Airport and for New York’s Metropolitan Transportation Authority. He collaborated regularly with his sister, the poet Estella Conwill Majozo, and architect Joseph De Pace.

Of the many significant works in Conwill’s oeuvre—which includes the Martin Luther King Jr. memorial Revelation (1993) at the Yerba Buena Center for the Arts and Poets Rise (1989) in South Jamaica, Queens—Rivers (1991) at the Schomburg Center for Research in Black Culture is the seminal work of his career. Created in honor of Langston Hughes and Arturo A. Schomburg, Conwill’s brass and terrazzo cosmogram takes its title from Hughes’s 1921 poem “The Negro Speaks of Rivers.” The artwork is positioned above an underground tributary of the Harlem River, and the place where Hughes’s cremains are entombed in a book-like urn. “If there is one location in Harlem that represents the Harlem Renaissance and its myriad of connections of the past, present and onward, it is the Cosmogram,” According to Christopher P. Moore, historian and curator at the New York Public Library.

Conwill enjoyed an enduring collaborative relationship with the Studio Museum that began in 1982. In 1984 he made The Joyful Mysteries (1984–2034 A.D.), consisting of seven bronze time capsules that will remain buried at the Museum until 2034. Each capsule contains a confidential testament from an important cultural figure in the Black community: Artist Romare Bearden, writer Toni Morrison, and opera singer Leontyne Price are among them.

Along with artworks in the Studio Museum’s permanent collection, Conwill’s work is also held by the Museum of Modern Art in New York; the Museum of Contemporary Art, Los Angeles; and the Hirshhorn Museum and Sculpture Garden in Washington, D.C. He is the recipient of various awards, including a Guggenheim Fellowship, the Prix de Rome, and a Louis Comfort Tiffany Foundation Award.