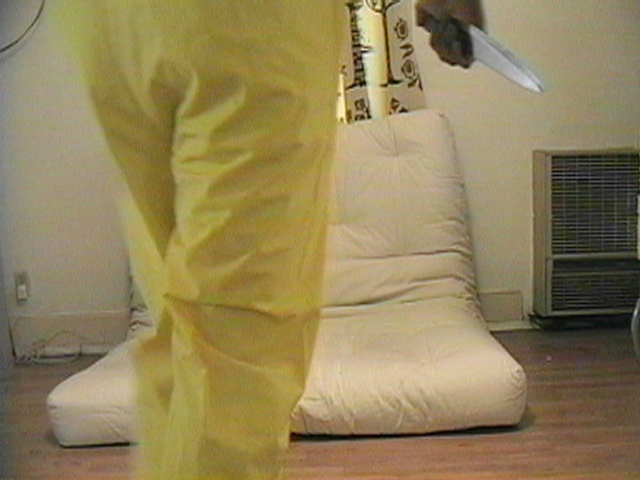 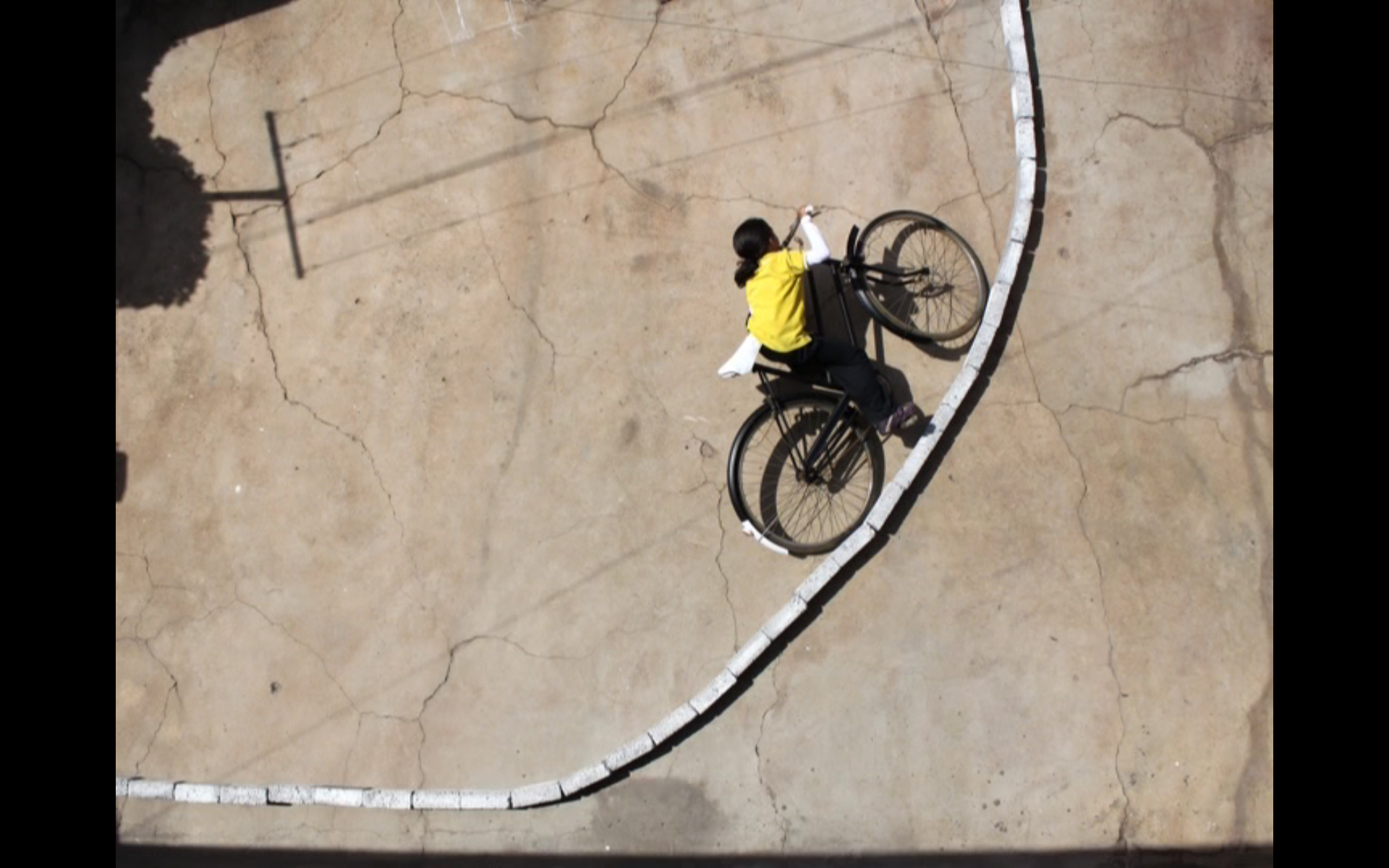 Robin Rhode’s (b. 1976) Parabolic Bike follows a child as she tries to ride her bike across an ever-changing curved line. To make the video, Rhode staged aerial photographs from the roof of his mother’s house in Johannesburg, South Africa then sequenced the images to create a stop-motion digital animation. The whimsical narrative depicts the young girl as she tries to ride across a parabola formed by bricks that are continually rearranged and consistently turn her around. In this concise video, set to music that oscillates between consonance and dissonance, the artist uses bricks as a drawing tool and emphasizes the passing of time as shadows of a tree and telephone wires shift across the cracked, tan ground.

Robin Rhode was born in Cape Town, raised in Johannesburg, and currently lives in Berlin. Working between drawing, performance, photography, posters, artist books and video, Rhode’s work explores direct human interactions with the world of art objects and images. The artist often constructs depictions of vehicles, such as bicycles, motorbikes and cars, as well as abstract, geometric shapes and patterns like the parabola. Exploring the visual geography of the urban environment, he imbues the street—often associated with the real and authentic—with a sense of imagination and fantasy. In this way, he underscores the strivings and struggles over public space in post-apartheid South African society.

Parabolic Bike was originally made for a 2009 performance tour in collaboration with Norwegian pianist Leif Ove Andsnes (b. 1970), for which Austrian composer and musician Thomas Larcher (b. 1963) composed the video’s accompanying audio track. It is exhibited here for the first time as a single-channel projection. Rhode’s work is included in the Studio Museum’s permanent collection, and has been featured in Museum exhibitions including VideoStudio (2008) and 30 Seconds off an Inch (2009).

Rodney McMillian’s (b. 1969) Untitled (futon)—shot in one static take, using lo-fi equipment—depicts the artist repeatedly stabbing a futon with a knife, reducing the mattress to a pile of cotton, which he subsequently discards. In the video, McMillian uses performance as a strategy, both acting before a camera to make a recording for an audience, and performing the discrete task of destroying a mattress. Through a simple, repetitive gesture, the artist makes reference to the history of painting, substituting futon and knife-jab for canvas and brushstroke.

McMillian is a Los Angeles–based artist who works in multiple media, including painting, sculpture, installation, performance and video. Untitled (futon), brings together several of the artist’s ongoing concerns, including an emphasis on artistic process, the use of discarded objects and the politics of the domestic sphere. McMillian’s works consistently make use of post-consumer materials and repurposed artistic tools, including home furniture, unstretched canvases and public monuments. His particular reuse of these objects emphasizes their physical, tactile relationships to the body and to constructions of social class.

Untitled (futon) was first exhibited as part of an installation at the Institute of Contemporary Art, Boston, and is exhibited as a single-channel projection here for the first time. McMillian is represented in the Studio Museum’s permanent collection and was included in the exhibitions Veni Vidi Video (2003), Frequency (2005) and Philosophy of Time Travel (2007). His contribution to The Bearden Project is currently on view in the Main Gallery.

VideoStudio is an ongoing series of video and film installations inaugurated in fall 2008. Organized by Exhibition Coordinator and Program Associate Thomas J. Lax, this fifth iteration of the program takes an in-depth look at individual works by two artists who have significantly contributed to the relationship between moving-image technology and other artistic media, including performance, drawing, painting and installation. Through innovative and experimental forms, both artists create new ways of engaging with contemporary ideas about society.

VideoStudio: Rodney McMillian / Robin Rhode is generously supported by a grant from the Lambent Foundation Fund of Tides Foundation.