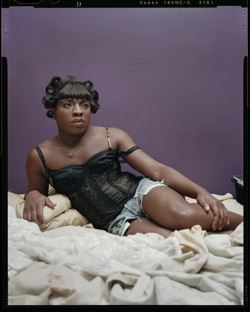 If it Don’t Fit

Kalup Linzy: If it Don’t Fit was the first museum survey of the artist’s work, and included over twenty videos made over the last seven years, a drawing suite and a one-night acoustic performance. From his original take on the soap opera and sketch comedy genres to his music videos and filmic shorts, this compilation tracks the artist’s clever and complex approach to questions of race, gender, class, sexuality and national identity. The title, If it Don’t Fit, is appropriated from a song Linzy used in a recent video. With innuendo and double entendre, this blues lyric speaks to both the disappointments and hopes of attempting to belong to aesthetic genres, social categories and intimate relationships.

Linzy first presented his cast of comedic and dramatic characters at the Studio Museum in African Queen (2005), and then again in Frequency (2005), a group exhibition of emerging artists. Since then, he has continued to work as a writer-director-actor and singer-songwriter. His work draws on a variety of American pop- and counter-culture genres, including early video and performance art, gay drag performance, reality television competitions and YouTube videos.

The video component of If it Don’t Fit is organized into three hour-long programs, which were on view throughout the duration of the exhibition. Each highlights a recurring theme in Linzy’s work. Taking its point of departure from the artist’s ongoing negotiation of love, longing and loss, The Pursuit of Happyness features both narrative and music videos. Da Churen brings together works from the artist’s iconic “Churen” (2003-05) series, which traces a set of family archetypes, narrated over a series of phone calls. Finally, Ride to Da (Art) Club juxtaposes videos that self-reflexively take on issues of ambition and belonging in the contemporary art world as well as the pop music and club scene.