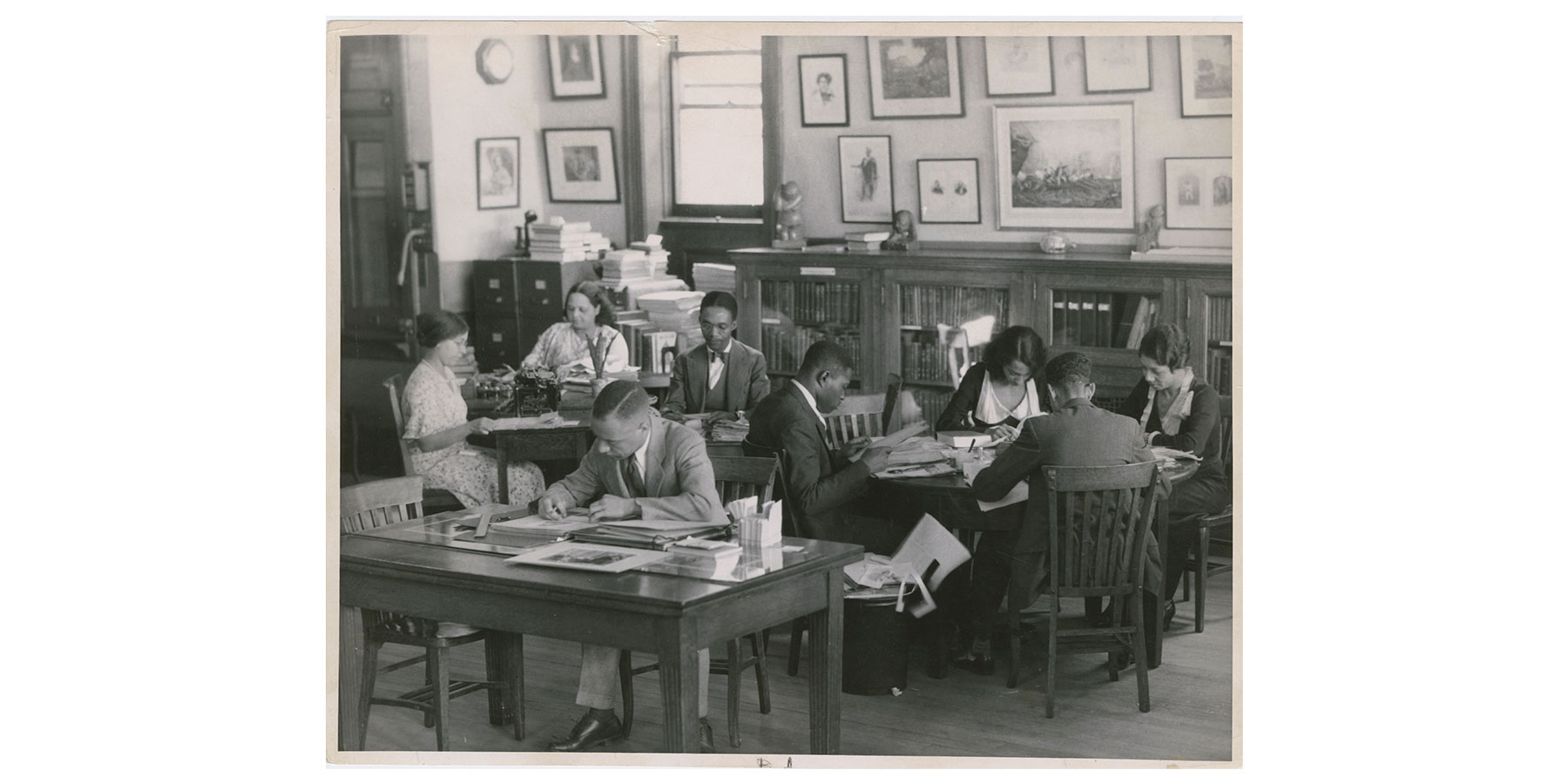 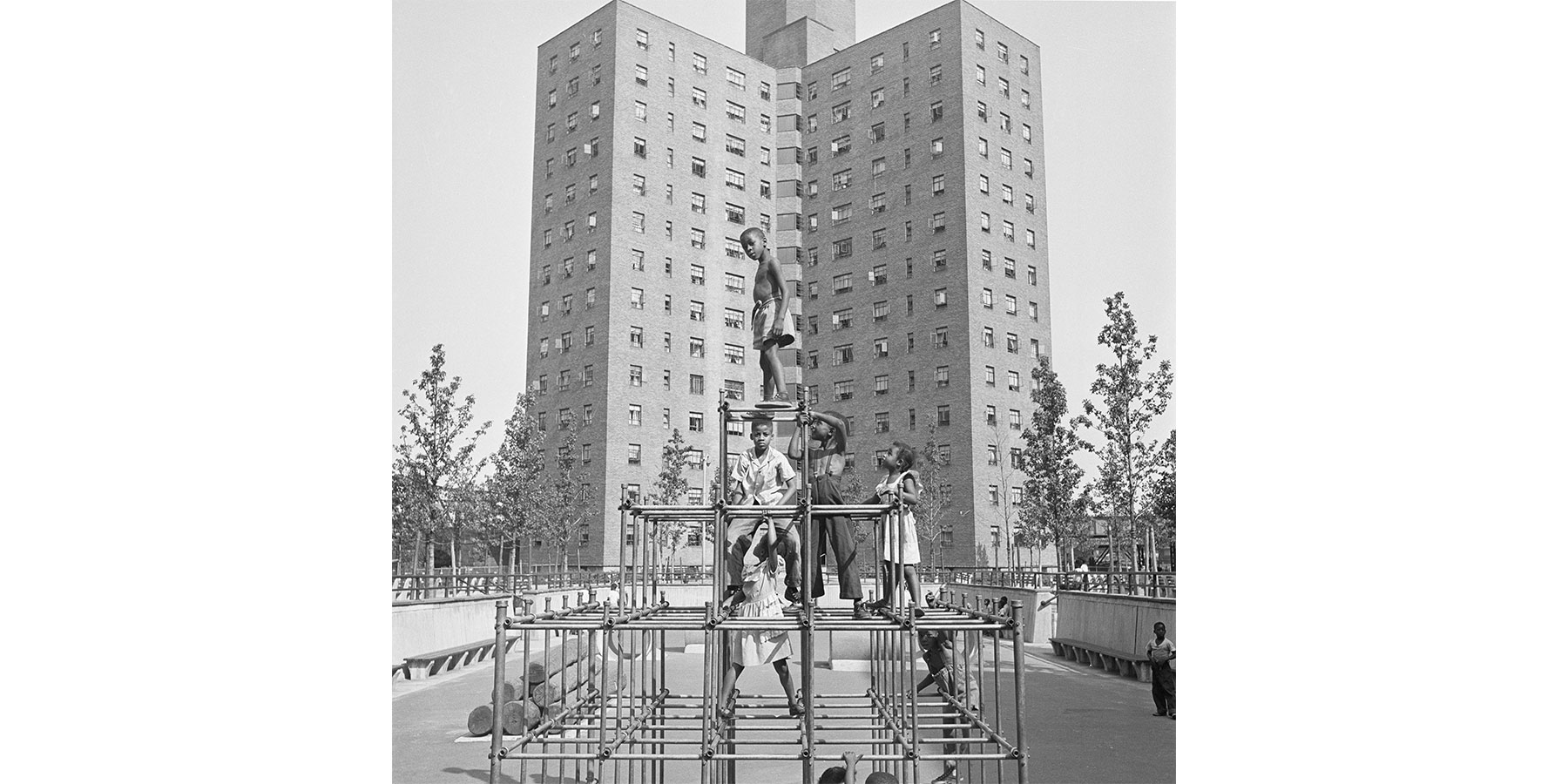 Throughout the twentieth century, Harlem has been regarded as a beacon of African-American history and culture. Sites such as the Apollo Theater, Abyssinian Baptist Church, and Malcolm X Corner, at 125th Street and Seventh Avenue, serve as popular postcard images that represent significant places and moments in this community.

Today, Harlem continues to evolve as a center of history and culture. Every day, changes are witnessed by its residents and experienced by tourists and visitors from all over the world. Harlem Postcards, an ongoing project, invites contemporary artists of diverse backgrounds to reflect on Harlem as a site of cultural activity, political vitality, and creative production.

Harlem Postcards: June 2021 is available as a digital postcard to be downloaded for free and shared. 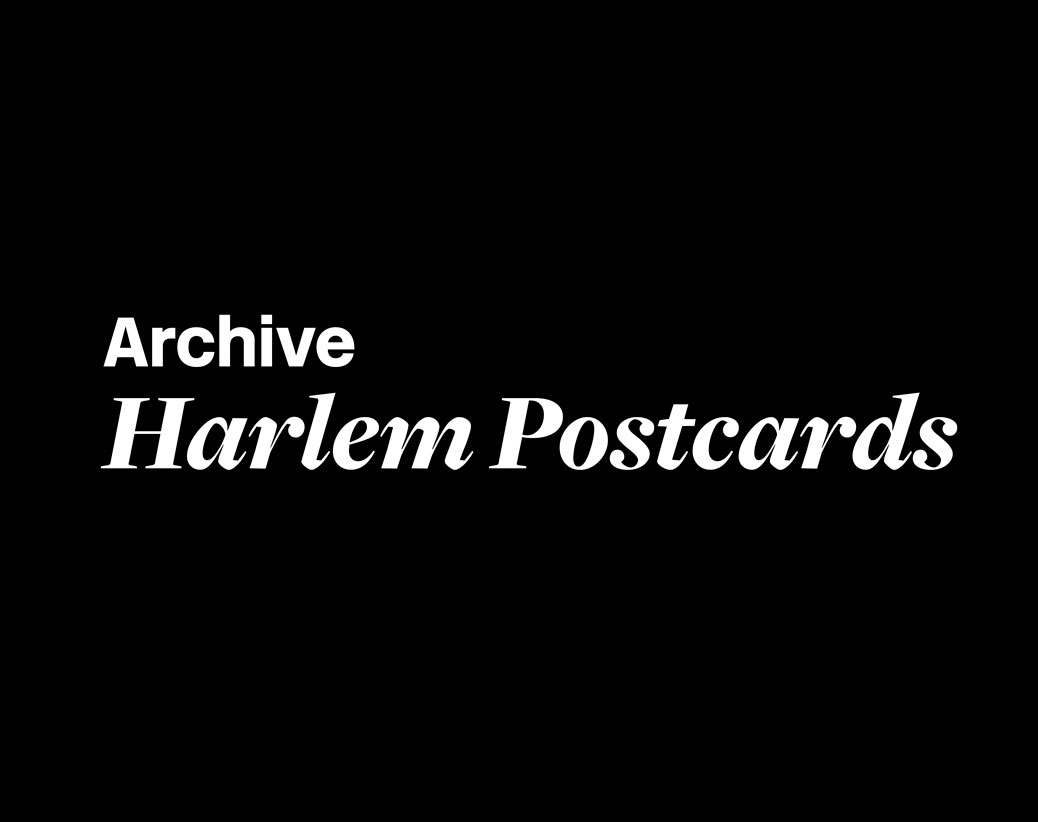 From April through June, Harlem Postcards honors the importance of photographic documentation across Harlem.

Exploring the role of New York City’s archives as repositories of collective memory, these historic images construct an evolution of Harlem—one that is necessary for understanding its present. Taken over the last 100 years, these color and black-and-white photographs reveal intimate and dynamic moments of congregation, play, and conversation that capture the essence of community in public space and the central role it has played in shaping Harlem’s illustrious history. 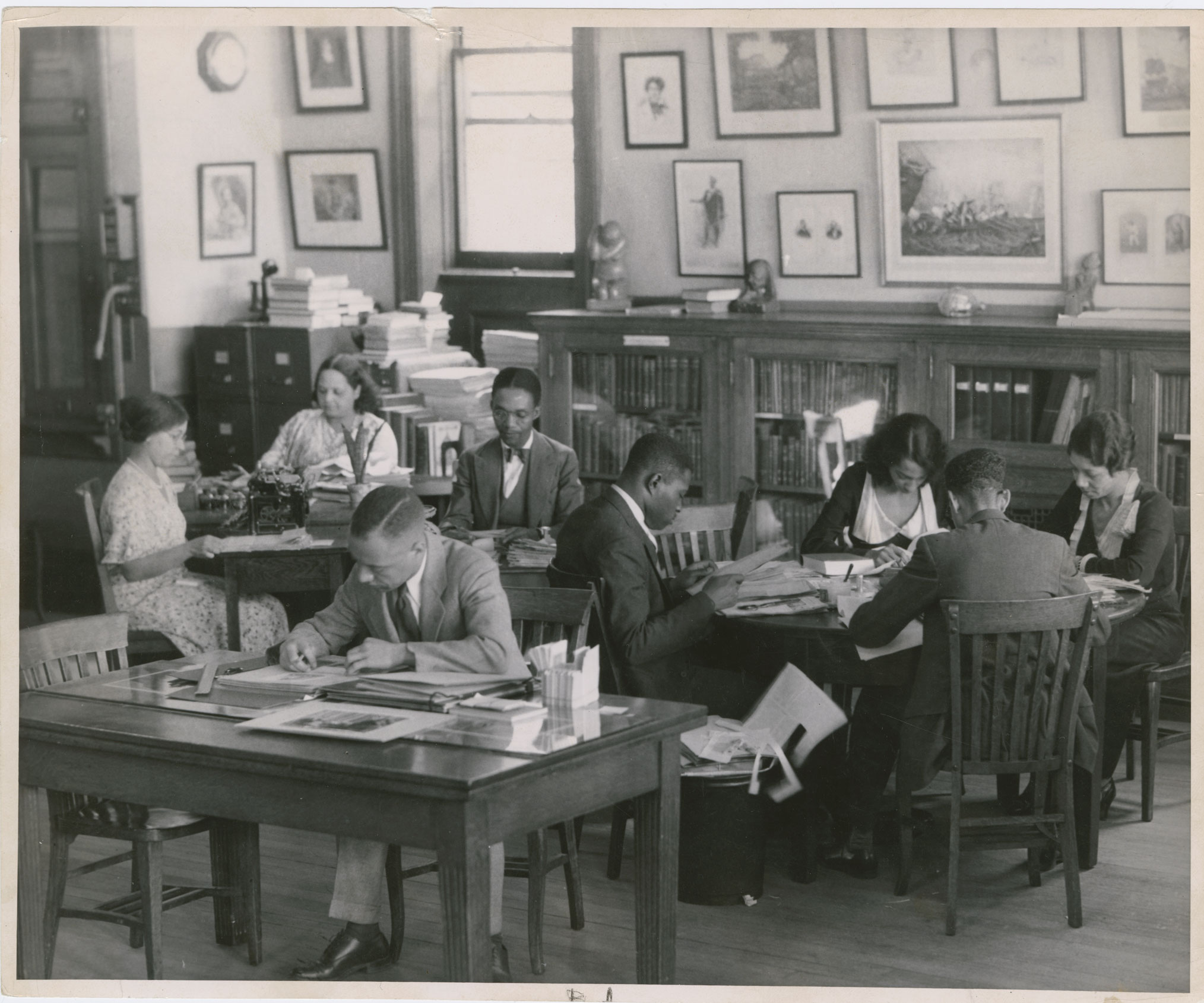 Unknown Photographer
View of researchers using the Schomburg Collection, when it was the 135th Street Branch Library Division of Negro Literature, History and Prints, as it looked in 1938, with Catherine A. Latimer, reference librarian of the collection, in left background, 1938
Gelatin silver print, 8 ¼ x 9 7/8 in. (21 x 25 cm); black and white
Photographs and Prints Division, Schomburg Center for Research in Black Culture, The New York Public Library

For generations, the Schomburg Center for Research in Black Culture has been a gathering place for the Harlem community and an important site for Black scholarship. In 1940, a special division within the 135th Street Branch Library was renamed the Schomburg Collection of Negro Literature, History and Prints in honor of Puerto Rican–born Black scholar and bibliophile Arturo Alfonso Schomburg, who served as curator of the division from 1932 until his death in 1938. The Schomburg Collection, which includes manuscripts and artwork from the Harlem Renaissance among its holdings, was designated as a full research library in the New York Public Library system in 1972.

This image, captured in 1938, is an early indicator of the Schomburg Center’s investment in maintaining its archive and encouraging Black scholarship. The Schomburg Center was, at its founding, one of the only research libraries where Black intellectuals could congregate in public prior to desegregation in the United States. Young researchers would come together to study books, prints, and files from integral moments throughout Black history in order to cultivate knowledge for future generations. Today, the Schomburg Center remains a leading archive of its kind. This image documents the important intellectual investigations that occurred in its early years as young scholars convened there. Their work and curiosities were supported by research librarians, such as Catherine A. Latimer located in the far left corner of the room, who continue to facilitate access to its prized collection. 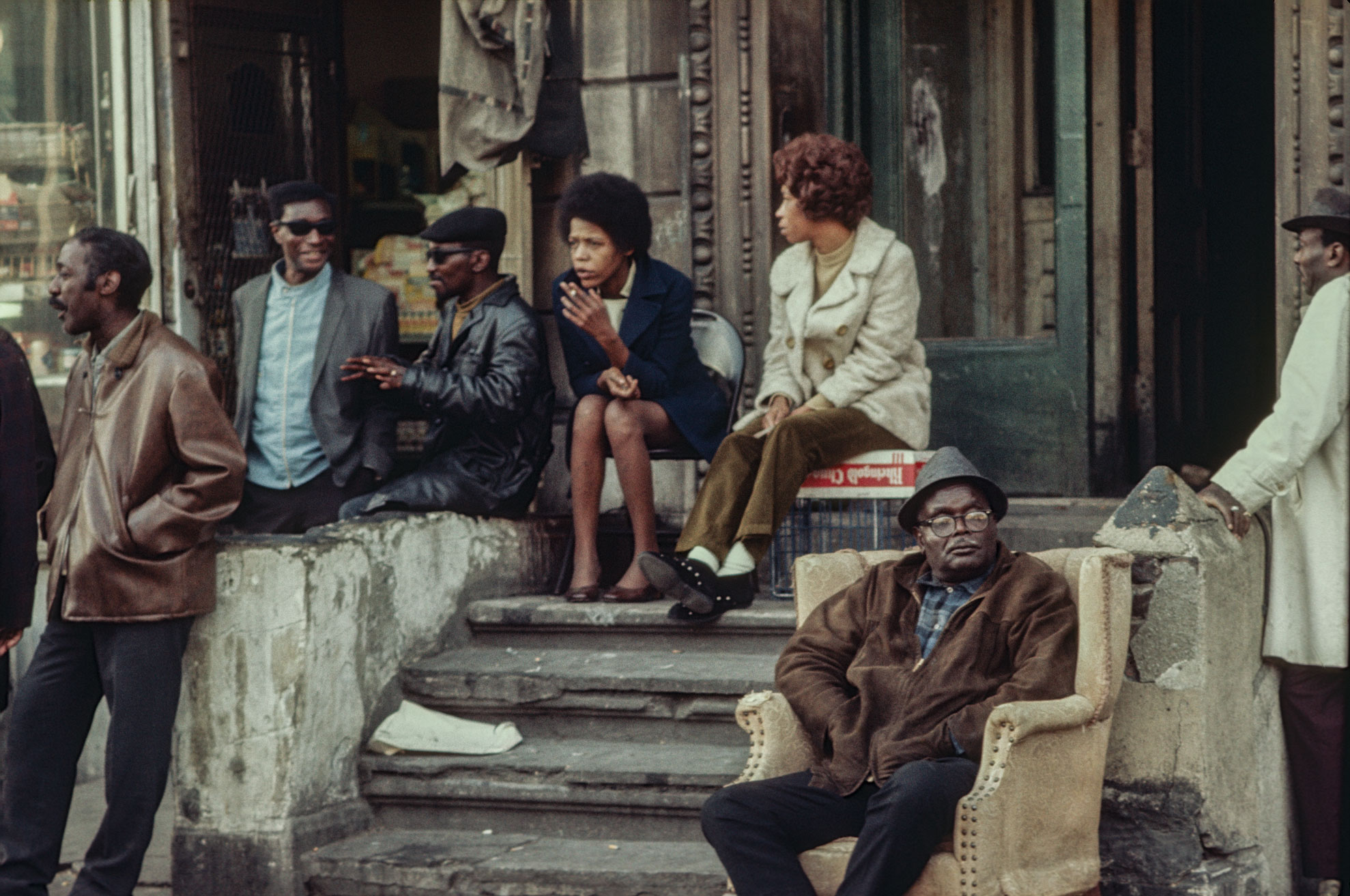 This month’s Harlem Postcard features a photograph from the Library of Congress. Harlem Postcards: May 2021 is organized by Angelique Rosales Salgado, Curatorial Fellow, Exhibitions.

Camilo José Vergara (b. 1944, Santiago, Chile) is a New York–based photographer and documentarian who began photographing New York City streets in the 1970s. Trained as a sociologist with a specialty in urbanism, his photography practice employs techniques adapted from sociological methods. His lifelong working method—returning to the same locales to document changes in architectural landscapes and the makeup of their communities—embraces a systematic rigor and a replication of vantage points over time.

Vergara’s sensitivity to the complexities of environmental influence on social behavior amplifies his image-making process. According to one of his artist statements, “I think of my images as bricks that, when placed next to each other, reveal shapes and meanings of neglected urban communities.” This color photograph of a brownstone entrance, likely along Lenox Avenue south of 125th Street, focuses on his documentation of people throughout his early career. With 35 mm High Speed Ektachrome film, Vergara captures the fleeting yet familiar moment of moving through the city and turning a corner to find a stoop full of people. The composition, akin to the happenstance of walking and encountering, is formed by a collective convening. An ensemble of individuals, garments, textures, displaced furniture, and hues monochromatically converges against the Harlem brownstone’s facade. The quotidian drama of holding space on the street, of shared time made public, here brings forth a flare of conversation, movement, and looks. 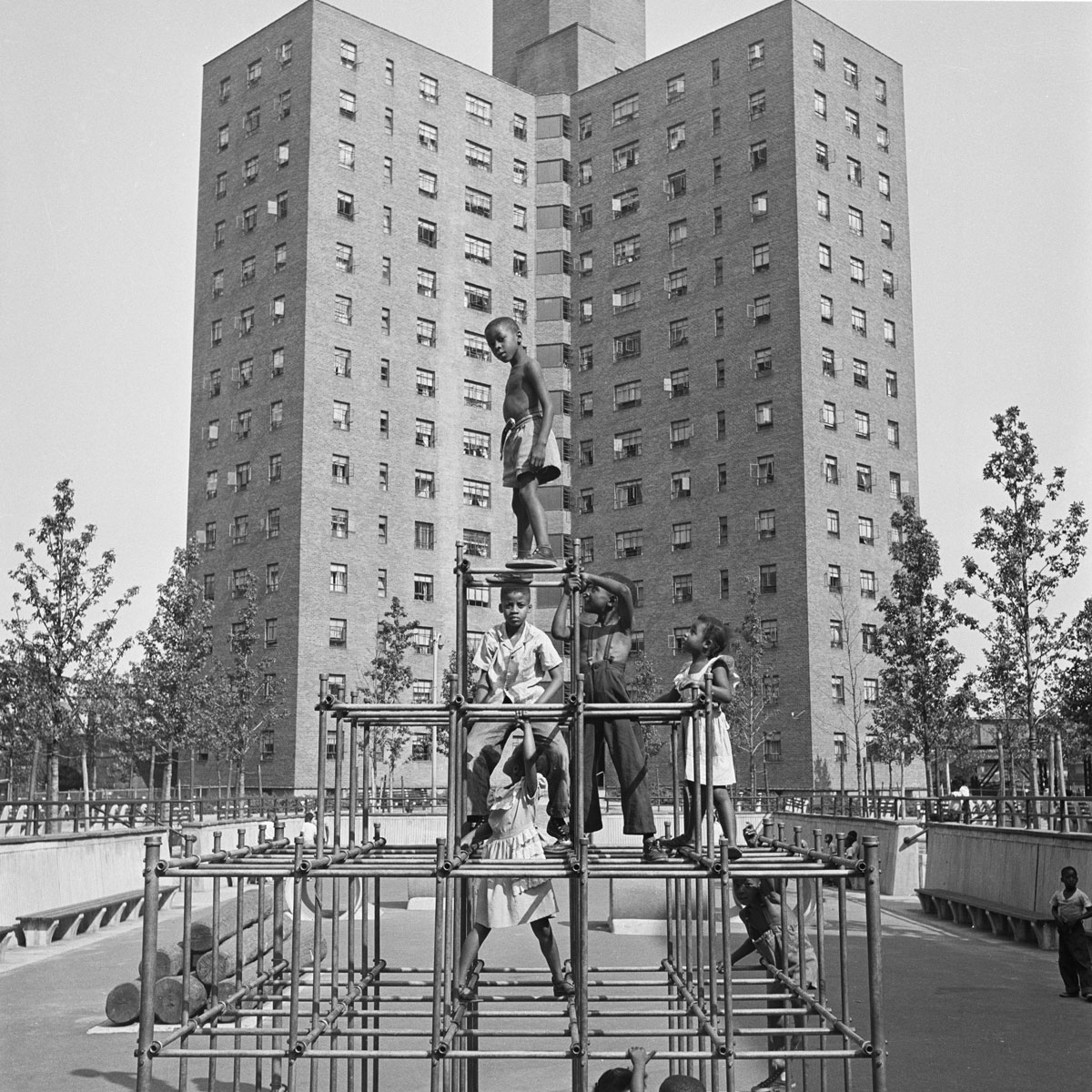 This month’s Harlem Postcard features a photograph from the Museum of the City of New York. Harlem Postcards: April 2021 is organized by Zuna Maza, Curatorial Fellow, Permanent Collection.

John Vachon (1914–1975) entered the world of photography through the Farm Security Administration (FSA), the New Deal agency with a photography program that documented the social conditions of the Great Depression in the United States. At the FSA from 1936 to 1943, Vachon started in an administrative position, and from there began to develop his photography skills through observation of colleagues such as Walker Evans and Ben Shahn. Eventually he became a staff photographer. After stints at Standard Oil and documenting the condition of postwar Poland for the United Nations, in 1947 Vachon joined Look, the mass-circulation biweekly general interest magazine, where he served as a staff photographer until the magazine folded in 1971.

Retaining some of the documentary style he developed during his time with the FSA, Vachon adapted his photographic approach to reflect narrative-focused assignments at Look. This image, one of many taken on assignment in Harlem between July and August 1949, captures children congregating at a local playground. Vachon’s image, while composed with a keen awareness of form—the vertical lines of the public housing building in symmetry with the children and play structure—retains the spontaneity of everyday life. Above all the others, one child gazes out at the photographer, and us, like city strangers making eye contact briefly before going about their day. Vachon’s work, situated somewhere between social documentary and postwar street photography, is a snapshot within the larger narrative of his assignment, and a fleeting moment in Harlem’s history.