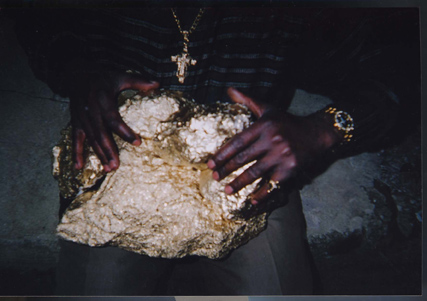 “National Geographic Magazine, a prominent journal of photographic essays, has done many projects in Harlem, documenting the cultural and physical changes in Harlem from its Renaissance to its recent neo-renaissance , for the last couple of years there’s is been interest in its cache as a land and property. I hope they haven’t forgotten about its’ people.

Before I met Barry on the corner of 126th St and Adam Clayton Powell Boulevard, I had been placing my large ‘fake’ gold nuggets all over Harlem for a few days. My goal was to go fishing, the “nuggets” would function as shiny bait for people to interact with them, touch them, and luck would have it that Barry was the only one who actually picked them up , and offered his person for my photographic project. He was interested in the idea of over-sized gold nuggets , and even more delighted when I said that gold prospecting and mining still goes on ..in parts of Alaska ,Australia and even North Carolina…Barry wanted to buy more gold jewelry and thought of all the new pieces to add to his meager collection of a gold cross, and ring and his gold “chapereta” watch ..all obviously fake….

Barry held on to his new collection of “gold:”..and I gave my find of large gold nuggets to him for sharing his time and body with me… 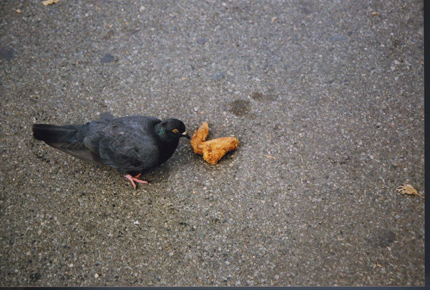 “As artists we often have a tendency to allow every moment, every sound, image, and even taste to become a metaphor for the experiences and people in our lives. This familiar scene of a pigeon eating fried chicken on 132nd Street, in its absurdly simple way, captured more than words can say.

You used to be my lover.

The Eastern American Coastal Pigeon will never hesitate to get up in your face, will eat out of the palm of your hand, but only for a little while, and will devour his distant cousin ...if deep fried.” 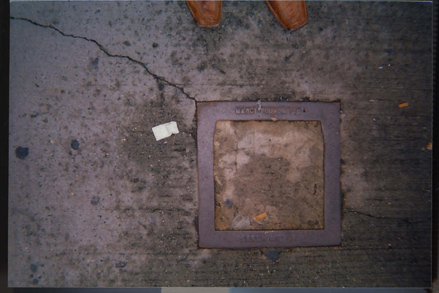 the coolest nigga you never did see, 2005

“As a young artist I was first introduced to the streets of Harlem Through the lens of the Photographer Roy DeCarava. His influence without question help mold the conceptual strategy that I employ today. When I made this image I felt it was a chance to document my first Harlem image making experience. There is nothing more genuine than proving that you are actually in a space. I think of this photograph as an homage, a chance to visit the home of one of my heroes.” 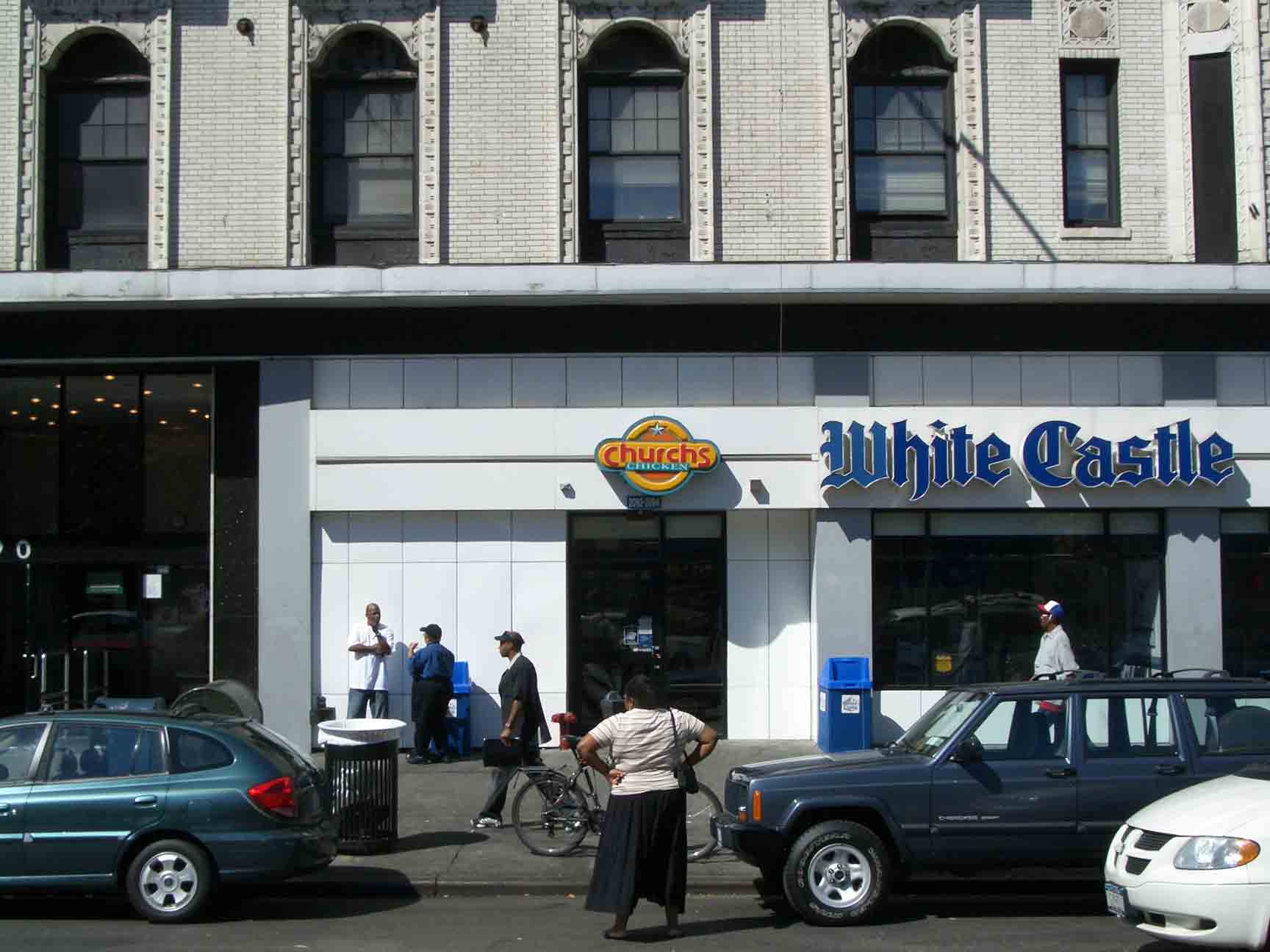 “One of the qualities of photography I like most is its ability to depict a specific moment in time, frozen, available for future generations to witness and explore. This is a quality that I cherish in the photographs of James Van Der Zee. His pictures of Harlem give us a window into the past, letting us see the people and places that have shaped what Harlem is today. As a result, my Harlem Postcard project is a response to the photographs of Van Der Zee. I have set about to rephotograph places in Harlem that Van Der Zee has photographed in the past. Many of the places do not exist anymore. However, there are a few that do and have not changed much such as The Abyssinian Baptist Church and Van Der Zee’s old studio on Lenox Avenue, around the corner from The Studio Museum in Harlem. Yet the photograph that I chose for the postcard is a restaging of Van Der Zee’s “The Hotel Theresa, 1933”. I am primarily interested in the hotel as a link between the past and present. I am also interested in the difference in the structure between the two periods. In the original photograph the focus is “Theresa Bar & Grill and Theresa Tap Room” on the ground floor of the hotel, an elegant looking establishment that appears to have catered to the guest of the hotel. In the same spot today there are Church’s Chicken and White Castle, fast food restaurants that caters to the thriving pedestrian traffic of 125th street. The difference in these photographs illustrates the shift in business interest in the Harlem community. In the end my photograph becomes yet another moment in the history of this building and Harlem community.”