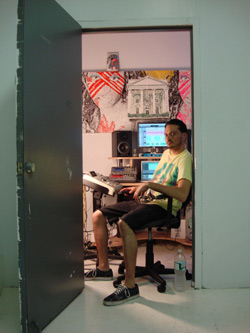 Dreaming in Sound by Ramon Silva

The abstract ethereal beats from Studio Sound artist Ramon Silva’s Dreaming In Sound are all-at-once nostalgic and contemporary, evoking the languor and beauty of a remembered or imagined summertime. Electronically produced beats meld with more organic sonic textures to produce a soundscape into which the listener is invited to envision the vibrancy and tradition of a diverse selection of urban locations. Interested in the modes by which sound affects and recalls memories, Silva pulls inspiration from concurrent exhibiting artist Hurvin Anderson, whose paintings of both public and private sites of social assembly such as barbershops and city parks are translated into stitched-sounds that evoke Harlem’s rich musical traditions and conjure new images of the vibrant streetscapes of a Harlem summer. Much like Anderson’s barbershop paintings, Silva’s compositions are serene and minimal, inviting the listener to fill in the sonic space with their own memories and narratives.

Silva’s self-exploration through sound recalls Stevie Wonder’s “That Girl” as a departure point for an artistic approach that prioritizes emotion over formal musical comprehension. Untrained in any academic musical capacity, Silva learned to create music by listening and, though he did not exactly understand the lyrical component of “That Girl”, he does recall listening to the track on repeat because of the way the rhythm made him feel. In the artists’ own words, “I always listened to music very critically and studied every nuance that I could find in anticipation of the breaks bridges and the harmonies. I grew up on Hip Hop and was a big fan of not only the music but also the cultural identity associated with it: the graffiti, the break-dance crews, and the fashion. I was completely enthralled by this phenomenon. But what resonated in me the most was the great emotion emitted from certain music. It could be from any genre, it was just about the feeling and the mood it put me in.” Pulling inspiration from other artists such as Miles Davis and Carlos Santana, Silva experienced a shift where he noticed the way complex yet minimal compositions allowed the listener to transcend the listening experience, close their eyes, and actually see the music. Dreaming in Sound conjures up multiple states new approach to music making that melds the visual and the aural, the sensory and the imaginary.

Silva—a multi-disciplinary artist with interests spanning from music to video to visual art—grew up in a rural town in southern California and moved to New York from San Francisco in the summer of ‘99 to pursue his visual art aspirations. He began his foray into music production after acquiring an ASR X drum machine while living in a Williamsburg loft full of artists, musicians and writers. His experience as a visual artist has greatly impacted his music production as he equates the process of blending sound and color to the process of composition and sequencing. Silva currently lives and works in Brooklyn.