The Talented Mr. Smith: Catching Up with a Young Designer 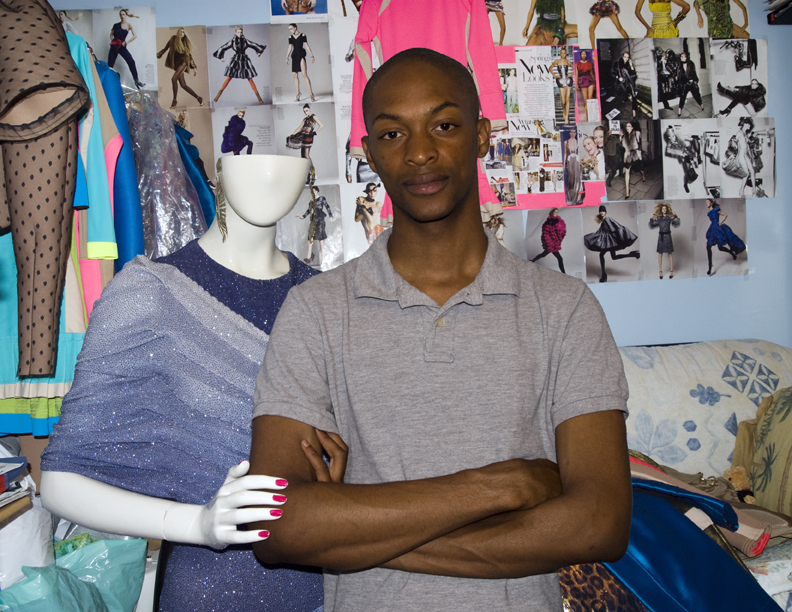 The two-hour trip from Harlem to St. Albans, Queens, is a trek and a pilgrimage that takes you from the brownstone bustle to quaint tree-lined streets. St. Albans is fabled for the Black luminaries who called it home—from W.E.B. DuBois to Lena Horne to LL Cool J. Budding fashion designer and autodidact LaQuan Smith intends to add his name to this list.

“She’s sassy,” says Smith. “She’s a woman of style and elegance. Every day for the LaQuan Smith woman is an event.” When asked to name his muse, Smith counters, “I’m inspired by women in general.” He’s also ready to take that role on himself when necessary: “Sometimes I’ll be my muse.” Plenty of sassy women (and men) have embraced Smith’s designs: Rihanna, Alicia Keys, and Lady Gaga have all sported his garments. Smith also wears his own designs, complete with six-inch Louboutin heels that raise his thin, 6-foot 2-inch frame onto his tip-toes—all nine of them, that is. During Smith’s senior year in high school, a sensitivity in his right big toe developed into excruciating pain. It was cancer—a fibrosarcoma that required the toe be amputated.

The designer marvels, “It’s a bone cancer that could have happened anywhere in the body, but it was at the very tip. It meant something. It gave me inspiration to pursue my dreams because you only live once.” His voice grows breathy as he speaks of influential designs, ad campaigns and runway looks, passions first discovered as a young teen, when Smith pasted Vogue editorial pages to his walls and taught himself to sketch in a manner reminiscent of French illustration and Warhol’s shoe drawings. Around the same time, his grandmother (now landlord to his bedroom-studio-showroom) bought and taught him to use his first sewing machine.

While finishing high school and undergoing cancer treatment, Smith applied to top design academies, only to be rejected. Discouraged and being prodded to seek another career, Smith nevertheless remained devoted to fashion: He made patterns from newspapers (the “Styles” section, of course), their fits not based on traditional tailoring points but on a series of cross-section measurements from his mannequin and fit model, Ivanka. An internship at BlackBook magazine officially started his career, but while deeply enamored of fashion magazines, Smith knew his calling was to create clothes: “I didn’t choose fashion design, it chose me.”

Smith is intuitive, energetic and a stickler for the fine details that make a total look. Asked to model his heels, Smith checks the mirror to see how they worked with his outfit. Even Ivanka sports jewelry and a manicure. More than just schema for clothes, his sketches feature women moving and walking—the clothes are just a part of the LaQuan woman’s lifestyle. Yet Smith realizes he must address more than just potential customers’ lifestyles, and he astutely evades expected moves. Design schools were curious about his “potential market” (read: ethnicity), and Smith wonders if that was a factor in his rejection. The “girls” in the sketches are pink and orange and blue: “they can be whatever they want to be, anyone can wear my clothes.”

Smith aspires to marry his unbridled creativity with business acumen: “I want to expand my brand and become a household name.” Like designers Donna Karan, Ralph Lauren or Miuccia Prada, Smith is expanding beyond couture and developing a sportswear line, LQS Sport, which will premiere this year at the New York Junior Tennis League and the World Cup in South Africa. Ebullient support that the designer has garnered from fashion high priest André Leon Talley and art collector Peggy Cooper Cafritz will no doubt aid Smith’s transition from artist to businessman, though he may lose the high heels in the process.

“I wore these for a purpose; it worked with the designs, and I needed a [public] look.” He remains undaunted by having to develop a business skill set and seems to welcome the challenge. “I am learning every single day,” he says and, lucky for the fashion world, he’s such a good student.