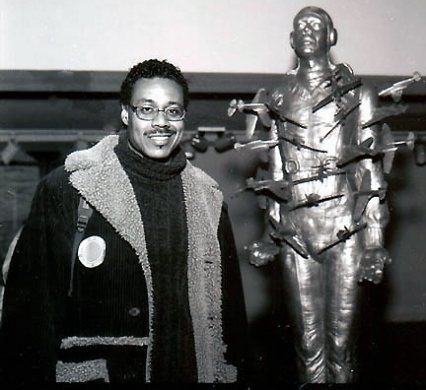 On September 11th, 2001, artist Michael Richards—at the time a resident in the Lower Manhattan Cultural Council World Views program—was working in the LMCC studios located in Tower One of the World Trade Center, on the 92nd floor. One among thousands who we remember this year on the tenth anniversary of the September 11th attacks, Richards’s untimely death hit especially close to home for the New York art world and the Studio Museum in particular.

Richards had a close relationship with the Studio Museum: he was an artist in residence from 1995-1996, and was included in the Museum’s exhibition Passages: Contemporary Art in Transition (1999–2000). At the time of the attacks, he was the only resident out of the LMCC program’s fifteen who was working in the World Trade Center studios. His memorial was held at the Studio Museum on September 21, 2001. To honor Richards’s life and artistic achievements, the LMCC later created the Michael Richards Fund, which offers grants to emerging visual artists of Caribbean descent.

Richards was best known for his sculptural work, and often explored the nexus of cultural mythology—particularly pertaining to African-American history—self presentation, and contemporary reality. His work is characterized by its materiality, resonance with the body and evocation of ancient iconography. In particular the history and legacy of the Tuskegee Airmen and the infamous Tuskegee syphilis experiments proved compelling, intertwining subjects for the artist. Tar Baby vs. St. Sebastian (1999) depicts a life-size bronze cast of an airman whose torso is pierced by toy airplanes, drawing on the iconography of the heroic martyr St. Sebastian. Brer Plane in the Briar Patch (1996), in the Studio Museum’s permanent collection, uses tar, wax and resin to depict an airplane tangled in a thatch of barbed wire. The similarities between the content of Richards’s artwork and the circumstances of his death are uncanny--five years earlier, in the exhibition brochure for To Carry Me Home: Artists-In-Residence 1995-1996, former Studio Museum curator Jorge Daniel Veneciano wrote of Richards's work “as a form of flight away from what is repressive, and a form of flight toward what is redeeming.” This thoughtful reflection on Richards has become, in recent years, a poignant metaphor for considering September 11th itself.

Hundreds of exhibitions, concerts, performances and other cultural events this fall will commemorate the day’s tenth anniversary and honor Richards and others whose lives were claimed. Many artists who have shown at the Studio Museum are contributing to these collective cultural responses. The Studio Museum’s sculpture by Richards, Brer Plane in the Briar Patch is included in the exhibition Before the Fall: Remembering the World Trade Center opening September 9th at the New York State Museum in Albany, and a work from his “Tuskegee Airmen Series” will be on view in the Brooklyn Museum exhibition Ten Years Later: Ground Zero Remembered  beginning September 7th.

Additionally, Faith Ringgold’s 9/11 Peace Story Quilt is on view at the Metropolitan Museum of Art through January 22, 2012, and on September 11th musician Jason Moran plays a tribute concert in Washington, D.C. Performers from Alvin Ailey American Dance Theater, among other companies, will participate in a free performance in Nelson A. Rockefeller Park in Battery Park City on September 10th and 11th, called In Performance: Commemorating the Tenth Anniversary of Sept. 11; and the LMCC presents the ongoing series InSite: Art + Commemoration, collaborating with other institutions such as MoCADA and the Museum of Chinese Art to produce projects by Cause Collective, Xu Bing and other artists.